3D3B, a project replicating the behaviour and distribution of the drugs used to treat neurodegenerative diseases, has been awarded the first prize at SciencEkaitza 2019, a competition giving recognition to the most ground-breaking research projects in Navarra and those with a significant social and economic impact. The prize was given by the Deputy Minister of Economic Development and Chairman of ADItech Technology Corporation, Manu Ayerdi, at the 2nd Navarra Science Gala, held in Baluarte.

Special prizes went to Rastreator, which studies how to activate the immune system through the olfactory bulb in Alzheimer’s patients; Runheat, a project to design printed-circuit radiant flooring; Zeco2da, for the design of zero-emission data processing modules; Nutryfert, a method to make highly effective granular fertilisers; and Emotional Films, for effective use of the audiovisual language to communicate scientific contents. The People’s Choice Award was granted to Stroke Challenge, a project to help patients recover from stroke, while the Patent Award went to Omega Zeta, the Navarra-based corporation with the largest number of patents applied for and published in 2018.

In his speech, Manu Ayerdi said, ‘SciencEkaitza wants to show the scientific reality of Navarra, and the remarkable work done in the fields of research and innovation.’ ‘It is a showcase of Navarra’s present and future, where science plays a fundamental role. At the Government of Navarra we are aware of this: “we know the value added to our society by researchers with their daily work,’ he added.

The gala, organised by ADItech Technology Corporation with the cooperation of the Government of Navarra, drew such remarkable figures as Professor María Blanco, researcher and member of the Navarra Innovation System, and winner of the SciencEkaitza First Prize 2018; Carlos Magdalena, Tropical Senior Horticulturist at the Royal Botanic Gardens, Kew; George Smoot, winner of the Nobel Prize in Physics 2006; actor John Cleese, co-founder of the British comedy troupe Monty Python; and comedian Luis Piedrahita, who was the emcee.

SciencEkaitza is coming to a close on Friday, 28 June, with a book presentation and signing: Carlos Magdalena’s El Mesías de las plantas, at the Elkar bookshop in Pamplona (C/Comedias).

Carlos Magdalena and Eduardo Ryan, Institutional Representative of Iberdrola in Navarra, gave the Special Prize for Renewable Energy and Resources to Zeco2da, a revolutionary project that consists in designing zero-emission data processing modules to be installed in the region, thus boosting a sustainable digital economy. This project was developed by Sergio Díaz de Garayo, Javier Llorente and Laura Frías at CENER, and Patricia Aranguren at UPNA.
George Smoot and Rafael Aquique, COO for Europe at Dana, delivered the Special Prize for the Automotive Industry and Mechatronics, which went to Runheat, a project to design a type of radiant flooring featuring an electric circuit printed in PTC ink on the inner surface that is only a few microns thick. The circuit is connected to an electric energy accumulator or receiver so as to evenly distribute heat in a home. The project’s developers were Santiago Gómez (NAITEC), and Alberto Berrueta and Álvaro Martínez (UPNA).

The Patent Award, giving recognition to the Navarra-based corporation with the largest number of patents applied for and published the previous year, was given by Iñaki Pinillos, Managing Director of Navarra de Servicios y Tecnologías (Nasertic), and Iosu Ibáñez, from the Navarra R&D+i Department, to Omega Zeta.
As to the People’s Choice Award, it was handed out by a member of the audience to the developers of Stroke Challenge, a project helping patients who have had a stroke on their way to recovery: Josune Orbe (CIMA), Roberto Muñoz (Navarrabiomed) and Francisco Fernández (ADACEN).

John Cleese and a representative of the Audiovisual Cluster of Navarra (CLAVNA) gave out the Special Audiovisual Communication Prize – an adequately chosen category for Cleese – to Emotional Films, for knowing how to use of the audiovisual language effectively to communicate scientific contents. This project was carried out by UPNA researchers Carlos del Río, Arantxa Villanueva, Andoni Larumbe, Mikel Galar, Mikel Elkano, Mikel Xabier Uriz and Daniel Paternain, Juan Carlos Pérez of UNED, Carlos Fernández de Vigo and Lorena Ares of NGL, and Leticia Garcés, from Padres Formados.

Last but not least, the SciencEkaitza First Prize, delivered by Manu Ayerdi and John Cleese, went to 3D3B, a project replicating the structure and outer layer of the brain for 3D printing in order to test the behaviour and distribution of the drugs used to treat neurodegenerative diseases before they are administered to the patient. The researchers that were part of the project were Navarrabiomed’s Natalia Ramírez, Maite Mendióroz, Ibai Tamayo Rodríguez and Alberto Labarga, UPNA’s Mauro Malvé, Rafa Cabeza, María Ángeles Cuellar and Arantxa Villanueva, and NAITEC’s Joseba Irigoyen. 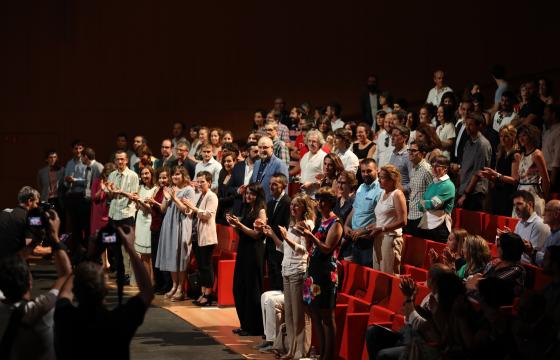 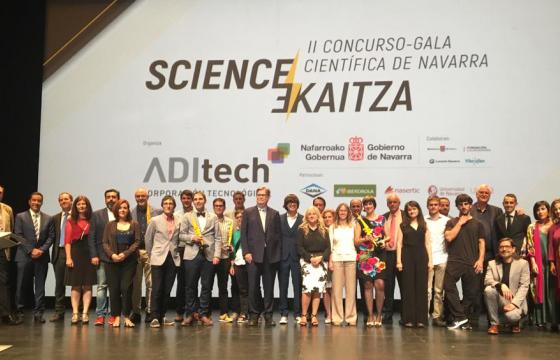 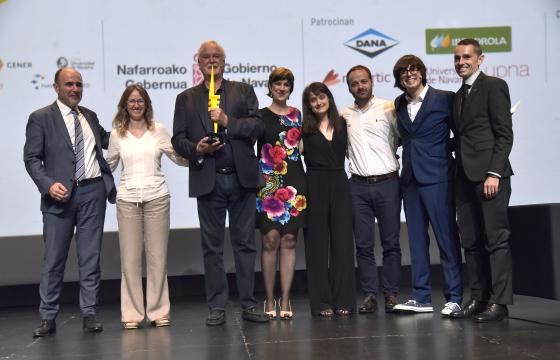 3D3B team. Natalia Ramírez with John Cleese and other researchers and organizers.
Download 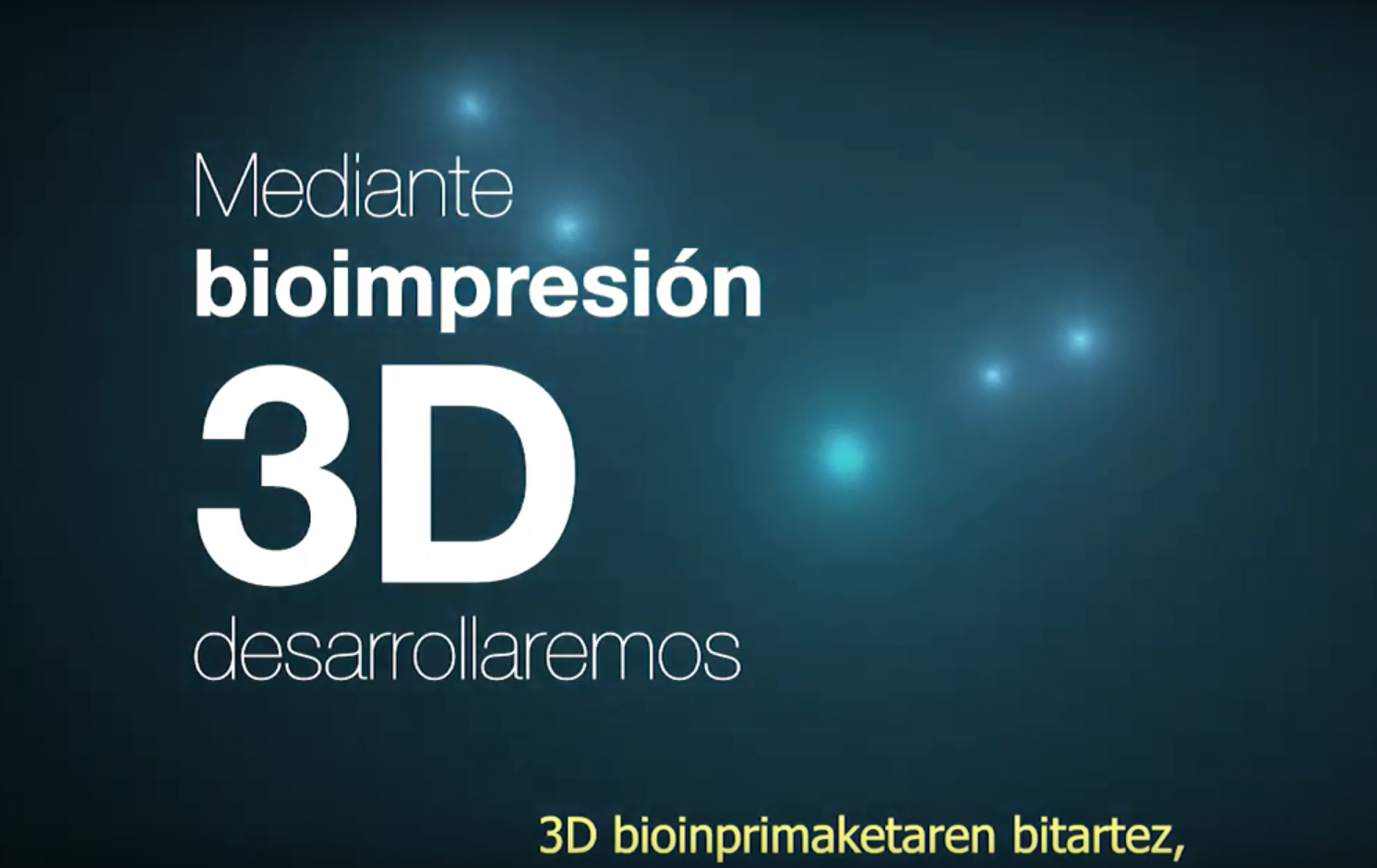