APTITUDE and OPTIMAGE: cross-border research to improve the quality of life of the elderly

APTITUDE and OPTIMAGE: cross-border research to improve the quality of life of the elderly

The results of these projects, fronted in the Foral Community by Navarrabiomed in collaboration with the HUN, have been presented during the Scientific Conference “New horizons in aging and health”.

The teams of the Cross-border APTITUDE and OPTIMAGE projects have disclosed the results during the scientific conference “New horizons in aging and health”, held this morning in Pamplona. Both projects, 65% co-financed by the European Regional Development Fund (ERDF) through the Interreg V-A Spain-France-Andorra Program (POCTEFA 2014-2020), have made it possible to deploy, in the cross-border area of the Pyrenees, dependence prevention actions for the elderly, through the creation of a network of experts that promote care, training, research and innovation in gerontology.

The APTITUDE project is an initiative aimed at the creation of a cross-border structuring framework for cooperation in the care of the elderly.  Dr. Nicolás Martinez Velilla, head of the Geriatrics Research Unit of Navarrabiomed and Head of the Geriatrics Service of the University Hospital of Navarra, leads these initiatives the challenge being “not to live longer but to live better by preventing dependence and improving the quality of life of our elders.” Martinez has stressed the importance of putting the focus on the elderly: "aging is an outdated concept that encompasses very heterogeneous and complex realities. Depending on the degree of dependence, there are several concepts of frailty that we have to address globally thinking about the affected person, not the disease.”

For this purpose, a network of experts that promotes gerontological care, training, research and innovation has been created. “It is essential to identify the fragile person so that, among all the different health professionals, we focus on them.” In this regard, with the aim of more accurately diagnosing the status of this sector of the population in our region and improving multidisciplinary cooperation between geriatricians and other health professionals, a screening of frailty exists in which 105 Navarreses with an average age of 78 years have participated.

As he explained by Fabricio Zambon Ferraresi, researcher of Navarrabiomed, “the actions undertaken within the framework of the projects have been developed in the midst of the COVID health crisis, a particularly difficult situation for the elderly, who needed us more than ever.” Proof of this are the online training sessions of the Vivifrail Promotion of Physical Exercise or videos with practical tips to face the negative effects derived from confinement, aimed at older people during the months of lockdown.
In addition, at the University Hospital of Navarra itself, an image tour of Navarra has been created to promote the physical and cognitive activity of hospitalized elderly people and work has also been done on the prevention of disability in rural areas.

The objective of OPTIMAGE, which emerged as a result of APTITUDE, focuses on the optimization of pharmacotherapy in the elderly - stage in which some people are polymedicated taking up to 10 or 12 different drugs simultaneously - to avoid unintentional harm to the patient that leads to more hospital admissions and a poorer quality of life. These risks are technically called “pharmacological iatrogenesis".

Victoria Roncal, regional coordinator of the OPTIMAGE project in Navarrabiomed, reveals that the project has allowed a more intense collaboration between the Geriatrics and Pharmacy services of the University Hospital of Navarra, within a specific consultation formed by a multidisciplinary team that addresses the challenges of polypharmacy. The specific incorporation of a specialist pharmacist to the Geriatrics team has meant a greater monitoring of the patient's pharmacotherapy, in the context of comprehensive geriatric assessment in all its facets: clinical, cognitive, social and functional, with the aim of achieving pharmacological optimization of both outpatient and inpatient geriatric patients. Specifically, between December 2020 and April 2022, the treatment of 1,025 hospitalized patients has been evaluated and, between May 2021 and April 2022, the pharmacotherapy of 317 people who have made a first visit to this specific service has been reviewed.

Also within the framework of OPTIMAGE, good practices have been exchanged between health professionals from the different territories and a training cycle has been organized for community pharmacy professionals to transmit practical knowledge on the review of treatments in elderly people.
On the other hand, Optipharm has been developed, a “game” in which a clinical case on pharmacological optimization in elderly people is recreated virtually. This application offers a safe simulation environment to make decisions and put into practice help tools for the optimization of pharmacotherapy in elderly people.
Pharmacological iatrogenesis has been the focus of debate in a round table with the participation of María Javier Ramírez, Dean of the Faculty of Pharmacy and Nutrition - University of Navarra, Maite Sarobe, Head of the Pharmacy Service of the HUN- SNS-O and Javier Garjón, Head of the Drug Advisory and Information Service- SNS-O. All three have emphasized the safety of medicines and the tools or methodologies especially focused on the safety and prevention of this problem.

Both cooperation projects are clear examples of Navarrabiomed - Miguel Servet Foundation's commitment to globalize research in the public health system. Coinciding with the program of events organized and coordinated by the General Directorate of External Action of the Government of Navarra on the occasion of the European Week in Navarra, Marisol Fragoso, management director of Navarrabiomed, has stressed the importance of participating in European projects for the internationalization of research in the public health system of Navarra: "In addition, being an important source of funding, it further qualifies our researchers by increasing their competitiveness and allows access to other agents of the research system such as companies and universities, developing collaborations that consolidate and remain over time”.
International meeting and workshops for the elderly.

During the conference, aging was also addressed by leading experts from the United Kingdom, Ireland and Chile.  Felipe Prosper, specialist in Haematology and Cell Therapy of the Navarra University Clinic and deputy director of IdiSNA has concluded this first block entitled "From molecules to patients". The scientific conference was closed by María Pilar Gayoso, deputy director general of Research in Cell Therapy and Regenerative Medicine of the Carlos III Health Institute.
In parallel, in Rincón de la Aduana, workshops have been organized that encouraged citizens to "take care of themselves and be a healthy senior”. Those interested have participated in seven activities: dance with Lorea Esparza, olfactory stimulation techniques within the framework of the Innolfact project, the Vivifrail physical exercise program promoted by Navarrabiomed and the University Hospital of Navarra, healthy habits and nutrition, new technologies and cognitive stimulation managed by the Red Cross. In addition, the Official Association of Pharmacists of Navarra, COFNA, has made available an information point on therapeutic adherence. 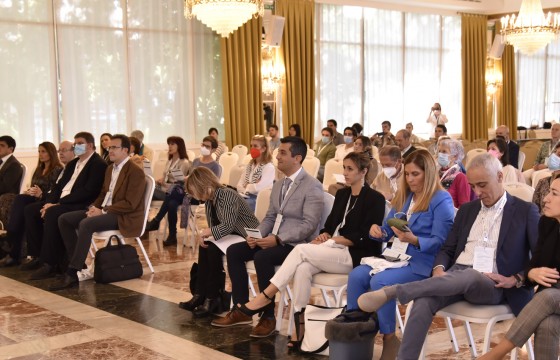 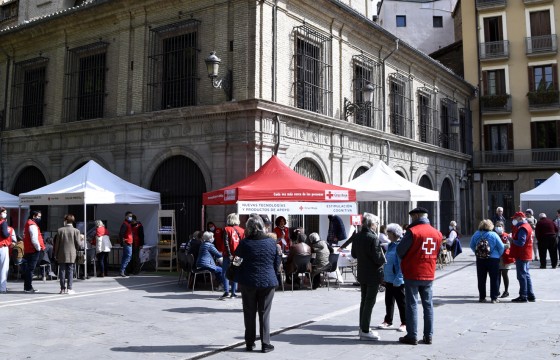 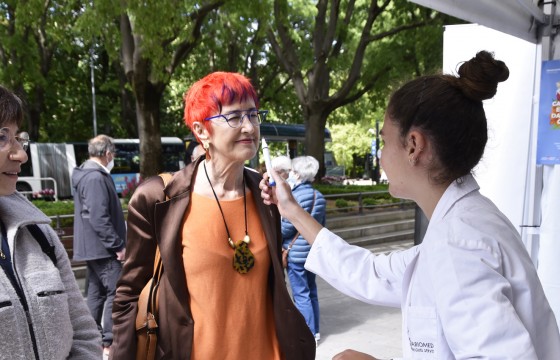 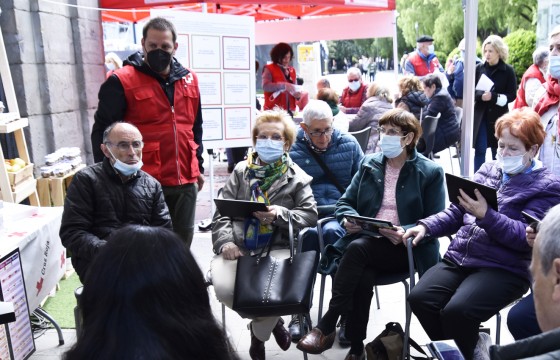