The Digestive System Service at the Navarra Hospital Complex (CHN) has led a multi-centre national clinical study aimed at preventing postoperative bleeding after big colorectal polyp removal – the most common complication after surgery, affecting between 3 and 10 per cent patients. The study was conducted in close collaboration with the Clinical Trials Platform and the Methodology Unit of Navarrabiomed-Miguel Servet Foundation.

Studies to date did not show scientific consensus or present clear evidence of the impact of this technique on large lesions after polypectomy in both left-sided and right-sided colorectal polyps. It is a pioneering technique, introducing a new approach to patient care.

The study was coordinated by Dr Eduardo Albéniz, a specialist in the CHN Digestive System Service and a senior researcher at the Navarrabiomed Gastrointestinal Endoscopy. It involved 235 patients with risk of delayed bleeding after polypectomy (up to 15 days after surgery). It also introduced a scoring system to predict delayed bleeding individually for each patient, identifying the patients with medium or high risk.

The study was conducted in collaboration with SEED and the firm ST Endoscopia (SureClip by Micro-Tech Endoscopy®, Nanjing, China). In addition, the projects carried out by Dr Albéniz in the field of gastrointestinal disease have financial support from La Caixa Foundation and Caja Navarra Banking Foundation.

The team are currently working on additional research. ‘Based on the clinical trials, we have embarked on a cost-effectiveness analysis to identify the patient subgroups for this procedure, in order to implement both the technique and the associated clinical protocols in the Digestive System Service at the Navarra Hospital Complex (CHN),’ Dr Albéniz explains.

Besides, CHN and Navarrabiomed professionals are considering two further studies: one with patients with left-sided colon polyps (where bleeding is less severe and clinical evidence is scarce so far) and another with patients taking anticoagulants. 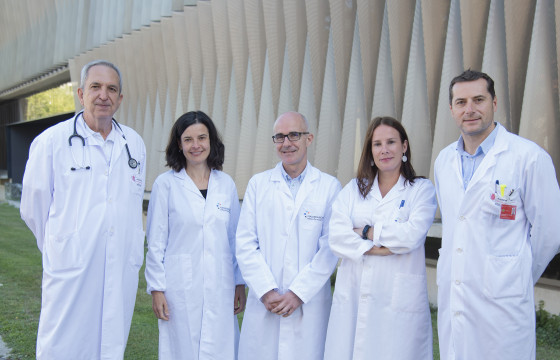