Biochemist Jaime Ibarrola Ulzurrun (Pamplona, 1991) has shown for the first time that a hormone is involved in mitral valve prolapse, a heart valve disease that leads to heart failure, and that a series of drugs can have positive effects on this condition. ‘The drugs known as antimineralocorticoids or mineralocorticoid receptor antagonists (MCRAs) are a promising option to reduce mitral valve remodelling. The only existing solution to date was surgery,’ Ibarrola explains. This was the subject of his doctoral thesis at the Public University of Navarra (UPNA).

The mitral valve is the valve between the left atrium and the left ventricle of the heart. Mitral valve prolapse is a condition in which the two valve flaps of the mitral valve do not close smoothly or evenly, but instead bulge (prolapse) upward into the left atrium. Sometimes, the mitral valve does not close tightly, allowing blood to flow backward in the heart. This condition is known as mitral valve regurgitation or mitral insufficiency. Most people with mitral valve prolapse – one of the most common heart conditions, affecting 176 million people around the world – never have problems. They do not need treatment or lifestyle changes. Some, however, do need to be treated. ‘To date, no drugs have been developed for this condition, so the only viable solution is surgery,’ Ibarrola explains. His doctoral advisor was Natalia López Andrés, senior researcher at the Cardiovascular Translational Research Unit of Navarrabiomed, a joint centre of the Government of Navarra and the Public University of Navarra (UPNA).

Ibarrola’s research responds to the need to study ‘new mechanisms and new therapeutic targets in order to find drug treatments for mitral valve prolapse.’ ‘Mineralocorticoids are a class of hormones produced by the human body. The primary mineralocorticoid is aldosterone. The aldosterone/mineralocorticoid receptor (Aldo/MR) pathway can cause cardiac fibrosis. In addition, a large number of studies have shown that the Aldo/MR pathway is involved in a number of heart conditions. MCRA drugs can block the effects of the Aldo/MR pathway. Moreover, significant clinical studies show that they can also improve cardiac function by reducing cardiac fibrosis,’ Ibarrola explains. He conducted his doctoral research project with financial aid from UPNA and a European programme.

Jaime Ibarrola holds a degree in Biochemistry and a master’s degree in Biomedical Research from the University of Navarra. At present, he is a postdoctoral researcher at the Molecular Cardiology Research Institute (MCRI) at Tufts University (Massachusetts, USA).

As a doctoral student, Ibarrola was twice a visiting scholar at the Cordeliers Research Centre, Sorbonne University, in Paris. He shared his results in eight international conferences in Germany, Spain, France and Ireland. Ibarrola is the author of about a dozen papers published in international scientific journals. 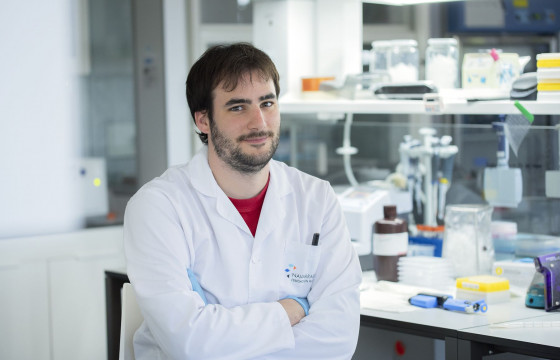