The European network APTITUDE - Acting for Trans-Pyrenees Prevention of Dependency in Seniors – is gathering in Pamplona on Wednesday, 3 July for a scientific seminar that is expected to draw more than 200 experts in active ageing and frailty. The seminar will take place at the Tres Reyes Hotel in Pamplona, starting at 8.15am. In addition, there will be side workshops organised with the Navarra Red Cross for the general public, at Rincón de la Aduana and Paseo del Doctor Arazuri, starting at 10am.

These events were introduced this morning at the biomedical research centre Navarrabiomed, the network’s leading institution in Navarra, along with the Public University of Navarre (UPNA), the Navarra Hospital Complex (CHN) and the Navarra Red Cross. At the press conference were Nicolás Martínez Velilla, APTITUDE Coordinator in Navarra and Head of the Geriatrics Unit at CHN, Juan José San Martín Baquedano, Coordinator of the Navarra Red Cross, and Jorge Marín Vidondo, Project Manager at Navarrabiomed.

Martínez Velilla said the seminar would be the third APTITUDE meeting – and the first to take place in Pamplona. It will gather primary health care professionals and representatives of hospitals and research centres, universities, nursing homes and businesses from Occitanie in France, Catalonia and Navarra in Spain, and Andorra.
At the seminar, experts will discuss the concept of intrinsic capacity in older individuals – that is, the set of physical and mental skills an individual can apply at any given moment, plus the functional capacity, which is the way in which an individual relates to and interacts with the environment – proposed by the World Health Organisation (WHO). Also, they will talk about the multi-component training offered by the project, targeted at health and social care practitioners working with frail seniors, so that they can prescribe the adequate physical activity routines, make cognitive stimulation interventions, give healthy diet guidelines, make psycho-social interventions, etc.

Keynote speakers include Norman Lazarus and Stephen Harridge, from King’s College London, who have broad experience in physical activity, anti-ageing and muscle deterioration in geriatric care and other sectors, like aerospace, where they have worked with NASA.

On Wednesday, between 10am and 2pm, there will be open workshops at Rincón de la Aduana and Paseo del Doctor Arazuri, Pamplona. Under the title ‘Active, healthy seniors/Tailerrak: Adineko aktibo eta osasuntsuak’, they are targeted at people over 65, but they can also be of interest to caretakers, relatives or volunteers. The workshops are free and no prior registration is required.

In addition, there will be APTITUDE-Red Cross Tents, hosting functional assessment, cognitive stimulation and adapted leisure activities for the elderly, giving information about support devices and healthy habits, and giving out supplementary material with workout routines.

According to INE data from 2018, the population of Navarra amounts to 647,219 people, 19.5 per cent are 65 or above. The region has one of the longest life expectancies in Europe: 86.6 years for women and 81 years for men. However, the quality of life varies: whereas women tend to live longer lives, they become more dependent than men after 65.

According to the World Health Organisation, the main causes of mild or severe disability in old age are sensory impairment, back or neck pain, chronic obstructive pulmonary disease (COPD), depression, falls, diabetes mellitus, dementia and osteoarthritis. Moreover, more than 50 per cent of the elderly suffer from a combination of illnesses and take three to five medicines together.

Initiatives like APTITUDE advocate a change of paradigm in elderly care. Caretakers should face the challenge of setting illness aside to focus on functional capacity and its maintenance or improvement. APTITUDE promotes healthy habits, physical activity and cross-generational, adapted leisure both in urban centres and rural environments, in an effort to combat loneliness, depopulation in rural areas and the stereotypes associated with ageing.

APTITUDE was established in 2018 as a three-year network to foster cross-border cooperation in four regions (Occitanie, Catalonia, Navarra and Andorra) by building its own local networks with a total budget of 2 million Euro.
The APTITUDE project, which includes the APTITUDE network in Navarra, gets 65 per cent of its funds from the European Regional Development Fund (ERDF), through the Interreg V-A Spain-France-Andorra (POCTEFA) cooperation programme, aimed at the development of cross-border economic, social and environmental action by means of joint strategies to promote sustainable territorial development. 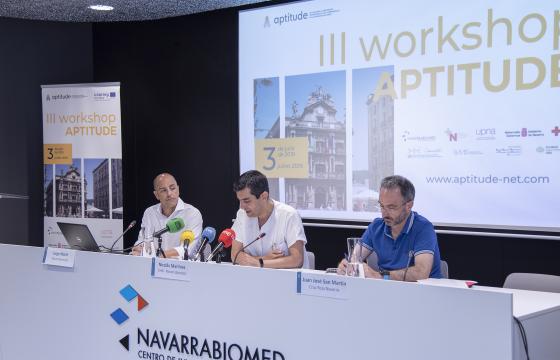 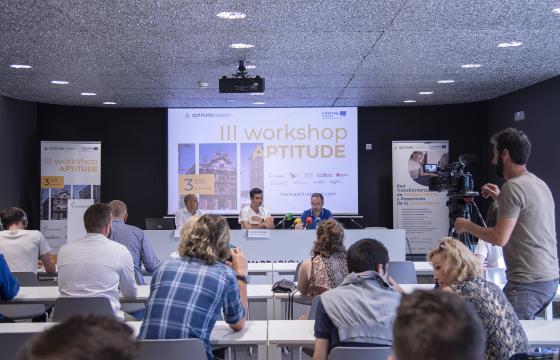