Patients with small-cell lung cancer receive brain radiation to prevent brain metastasis, which develops in half of these patients. Brain radiation side effects include memory loss, which affects 70 per cent of patients and is the main reason they refuse radiation treatment. The Navarra Hospital Complex (CHN) is participating in a study, led by Hospital del Mar in Barcelona and carried out at twelve other health centres, that shows for the first time that hippocampal avoidance in brain radiation is associated with improved memory.

The clinical trial was designed by the Clinical Radiation Oncology Research Group (GICOR), together with the Spanish Oncology Lung Cancer Group at the Spanish Society for Radiation Oncology (GOECP-SEOR). In Navarra, the study is led by Mikel Rico Osés, radiation oncologist, with the cooperation of Enrique Martínez López, Head of the Radiation Oncology Service, and Laura Bragado Álvarez, a doctor at the Radiophysics and Radiological Protection Service, all three from CHN. Also participating in the study are Margarita Illas Pérez-Mosso, of Navarrabiomed-Miguel Servet Foundation, who is the coordinator of the clinical trial, and Nuria Rodríguez de Dios, senior researcher and assistant doctor at the Hospital del Mar Radiation Oncology Service.

In phase III of the clinical trial, 150 small-cell lung cancer patients without brain metastasis were recruited. Fifteen of them were part of the study developed by the Radiation Oncology Team at CHN and the Clinical Trials Platform of Navarrabiomed-Miguel Servet Foundation in Navarra.

The hippocampus is a small area in the inner (medial) region of the temporal lobe that is thought to be principally involved in storing long-term memories and is also associated with learning and emotions. Previous studies in patients with brain metastasis from different primary tumours showed the advantages of protecting the hippocampus during radiation. However, there was no evidence that protecting this region of the brain in small-cell lung cancer patients treated with prophylactic radiation to prevent metastatic brain tumours helped prevent a decline in neurocognitive function.

This clinical trial assesses the impact of hippocampal protection on quality of life, side effects, incidence of brain metastasis, survival rates and changes in hippocampal volume. The study has been made possible by the cooperation of the Radiology Services of the participating health centres.

Additionally, a follow-up of patients was carried out for two years, including tests like MRI scans to study the evolution of hippocampal size, as well as memory tests. Results show that the group of patients with hippocampal protection did not lose memory after three months, and memory was preserved even two years after radiation. Moreover, brain images indicate that there was hippocampal atrophy in patients treated with whole cranial irradiation. When other aspects are taken into account, there are is no difference in survival rates between patients who received radiation with hippocampal protection and patients with whole-brain radiation therapy. Also, the incidence of hippocampus metastasis was very low.

Mikel Rico is completely satisfied with the results and the clinical relevance of the study. ‘The trial confirmed that this type of treatment is safe, prevents memory loss and helps improve the quality of life for small-cell lung cancer patients. Consequently, hippocampal protection will be soon be part of the clinical procedures,’ says Rico.

Hippocampal protection is only available in health centres like CHN, which have advanced equipment for the delivery of intensity-modulated radiotherapy, which enables precise conformation of the radiation dose to the target volume. This type of treatment will necessarily require greater dedication from the medical and radiophysics staff. 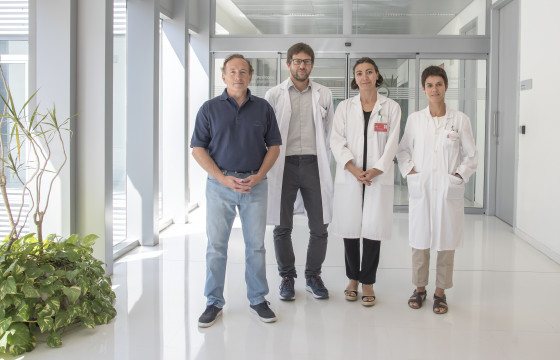