The Bioheart project won top honors in the SciencEkaitza international competition, held on Friday, June 25, within the framework of the 3rd Science of Navarre Gala. The event, hosted by comedian Luis Piedrahita, included the presentation of seven other prizes, after which the audience enjoyed the premiere performance of Dinamo (Dynamo) by theatrical group La Fura dels Baus.

Bioheart propose positioning Navarre as a hub of innovation for the development of bioartificial human heart tissue and its use in industrial and preclinical cardiotoxicity testing. Isabel Sola, a member of the SciencEkaitza jury, was in charge of presenting this award.

The Bioheart team is one of the largest to submit an application in the call, with 35 people from CIMA, Clínica Universidad de Navarra (CUN), Navarrabiomed (Biomedical Research Center), Navarrabiomed-CHN, and the company Ikan Biotech.

The awards ceremony began with presenter Luis Piedrahita being lowered from the ceiling and landing on a mobile platform, which the comedian then used to move on the stage of Navarra Arena and introduce the winning teams. Piedrahita also welcomed Paula Noya, who explained the essence of SciencEkaitza. Noya is the Director of Technological Cooperation and Excellence at ADItech, which is the coordinator of the Navarre Research & Development and Innovation System (SINAI) and the event organizer. Mikel Irujo, Navarre Minister of Economic and Business Development, and Juan Cruz Cigudosa, Navarre Minister of Universities, Innovation and Digital Transformation, also shared a few words with Piedrahita on the importance of this science gala for Navarre.

The SE2021 SINAI prize was awarded at the ceremony in recognition of collaboration projects in progress in any of Navarre’s six technological areas for smart specialization. The winning idea was Diaterei, a project that aims to identify changes in heart valve cells during endocarditis in order to analyze gender-based molecular differences in the development of infection. Juan Luis Arsuaga, jury member, presented the award. The 25 people who make up this team form part of Navarrabiomed, Navarrabiomed-CHN, CIMA, and the Association of Industry of Navarre (AIN).

The SE2021 OPEN Nasertic award, which is new this year, singles out new disruptive ideas involving research teams from outside Navarre. Proposals were received from other Spanish autonomous communities, such as La Rioja, the Basque Country, Madrid and Valencia, and from other countries, including France and Australia. The idea U-Space Navarra was the winner in the SE2021 OPEN Nasertic category for the use of long-range drones for public safety: rescue, firefighting, traffic management, emergency logistics and inspections of critical infrastructure (electricity lines and gas pipelines). Iñaki Pinillos, the Managing Director of Nasertic, presented the award. This team is made up of FuVeX (a company that makes long-range drones), the Government of Navarre, NAITEC and the UPNA.

The Viscofan SE2021 AUDIENCE award winner was chosen by voters on the SciencEkaitza website. A total of 10,725 votes were received, which nearly doubled the number received in the previous edition. The winner in this category was Hidden Reflections, a project that aims to combine the worlds of science and art by developing an artistic-scientific process for creating art works with great visual impact. José Ángel Arrarás, the Chief R&D Officer of the Viscofan Group, presented this award. This project is made up of AIN members.

This year’s award in the SE2021 IDEAS category, which received the most project applications in the competition, was divided into four Special Mentions. They were presented before the first IDEAS award. The first Special Mention was Automotive Industry and Mechatronics Ideas. The award was presented by Rafael Aquique, CEO of Dana Automoción, to SPRIs-AI, for improving rehabilitation of sports-related ligament and joint injuries using artificial intelligence and enabling users to recognize positions and assess exercises based on videos recorded on a cell phone. The team is made up of staff members from the Clínica San Miguel and the UPNA.

The IDEAS Special Mention in the Food Chain category went to AI-Value for developing an artificial intelligence tool for recycling and recovering agri-food waste in Navarre. The award was presented by Ramón Gonzalo, the Rector of the Universidad Pública de Navarra. CNTA and the UPNA participated in the project.

The Radical Project was the winner in the IDEAS Special Mention in the Renewable Energy and Resources category for developing a new detection system based on low-cost radar sensors, improved using metasurfaces, to perform nondestructive quality control of photovoltaic modules. The award was presented by Eduardo Ryan, the Area Head for Navarre at Iberdrola. The UPNA and CENER participate in the Radical Project.

The final IDEAS Special Mention was in the Health category and went to the Hepagena Project for carrying out a prospective, sociodemographic genetic study of the metabolic disorder associated with fatty liver disease in the pediatric population of Navarre. Alfonso Sánchez-Tabernero awarded this prize to another of the many teams competing in this edition, made up of members from the UPNA, Navarrabiomed, CHN, UNAV and CUN.

The awards ceremony ended with the presentation of the SciencEkaitza 2021 IDEAS award to the Bioheart Project mentioned above, after which the Fura dels Baus presented Dinamo, a work conceived for SciencEkaitza that combined artistic disciplines such as contemporary dance and theater with technology and engineering. Dinamo immersed the audience in the process of scientific thinking and showed how we start with the imagination as a higher creative process for dealing with transformation, development and innovation. The performance aimed to pay homage to the scientific community of Navarre.

The SciencEkaitza Science Awards are organized by ADItech, the coordinator of the Navarre Research & Development and Innovation System (SINAI), with the collaboration of the Government of Navarre, the Spanish Ministry of Science and Innovation through the Spanish Foundation for Science and Technology (FECYT), and the support of other public and private organizations. 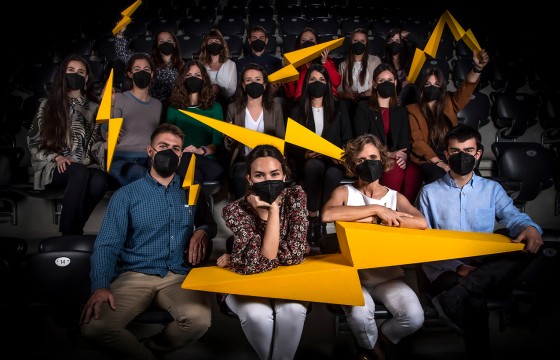 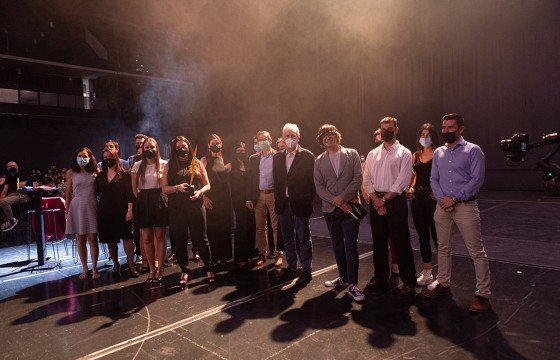